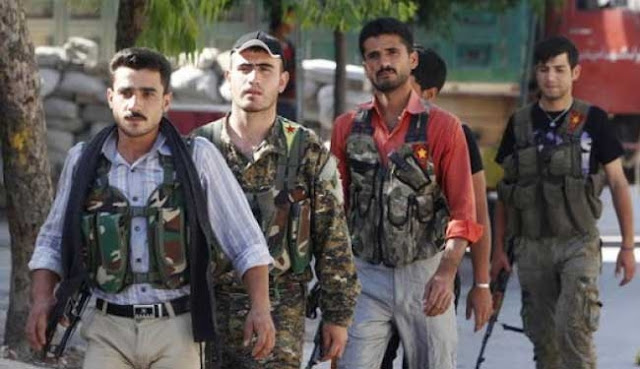 Even though the Kurds played an active part in protest marches and demonstrations against Bashar al-Assad at the outset of the so-called Arab spring of 2011 and even were subject to repressions from the authorities, later during the Civil war they chose a position of neutrality. Initially, the Kurds defended the areas of their concentration from any outside forces, mainly, the radical Islamist fighters, and participated in various opposition fora and negotiations related to the matters of the future state arrangements in Syria. In June 2012, the main opposition body, the Syrian National Council (SNC), elected as its head Abdel Sieda, an ethnic Kurd (he held post till November 9, 2012). Kurdish leaders repeatedly stressed that they would be satisfied with any government in Damascus so long as it guaranteed to inscribe Kurds’ rights and freedoms in the new constitution, including a status of autonomy or a federated region in the new Syrian state, proportional representation of the Kurds in the central government, the Kurdish language as a second official or regional language, etc. To any proposal of affiliation from either side of the Syrian conflict Kurds responded with a firm “no”.


By the end of 2012, the Kurds managed to create fairly effective local self-governing bodies (councils and committees) despite the difficult military and political setting. They comprised, amongst Kurds, other ethnic and religious minorities from the local population (Arabs, Armenians, Assyrians, Kurdish Yazidis, etc.) living in these territories. People’s protection units were formed to serve as a military force with volunteers from Turkish and Iranian Kurdistan and Kurdish women fighting in their ranks. At the critical point of fierce fighting near Kobani (530 km from Damascus) several Peshmerga units came to the aid of their Syrian kinsmen bearing heavy artillery from Iraqi Kurdistan. Kurdish opposition not only managed to stand its ground in Kobani but also liberated some adjacent rural areas. Islamist armed groups gained no help from the armoured vehicles and artillery seized by them in Iraq. Kurdish protection units were also the ones to hold back the jihadi militants in the Kurdish districts of Aleppo. The Kurds demonstrated exemplary courage and valour, the unity of its ranks, and proved themselves a significant force in the fight against the expanding international terrorism being carried out by radical islamists.

The border with Turkey has proven to be a stumbling block for the Syrian Kurds. After the Syrian forces left the Turkish border areas, the border fell under the sole control of the Turkish border guards and special forces. Here, fighters of the Syrian armed opposition, Syrian Turkmen gangs, Turkish nationalist groups such as the Grey wolves, radical islamists and jihadis of all stripes passed unchecked. There have been cases when Jabhat al-Nusra fighters invaded Kurdish enclaves in Syria directly from the Turkish territory. At the same time, the Turkish Kurds that tried to lend a helping hand to their Syrian kinsmen were obstructed by the Turkish authorities; there has even been artillery shelling and mortaring as well as aerial bombing by Turkey’s Air Force of border passages and areas densely populated by the Syrian Kurds. Ankara repeatedly emphasised in its official statements that the main political force of the Syrian Kurds, the Democratic Union Party (DUP), is allegedly affiliated with the Turkey’s Kurdistan Workers’ Party and that both these organisations are classified as terrorist by the Turkish government and that, in turn, should justify military and police actions against them. That is, R. Erdogan and his government see no difference between DUP, Daesh gangs and other islamist groups. At one point Ankara even tried to convince Washington and Brussels that there was a need to create a so called no-fly zone or buffer zone in the Syria’s North (in the Kurdish enclaves) stretching over 100 km long and 30-40 km deep, where the Syrian aviation would be prohibited from flying and the police functions would be assigned to the Syrian armed opposition and the Syrian Turkmen gangs.

Despite all the verbal abuse and threats from the Turkish authorities and the attempts of radical islamists to take over the Kurdish enclaves, the Northern and North-Eastern parts of Syria, also known as Rojava, have been pronounced and constituted an autonomous region. This territory also known as West Kurdistan is divided into three regions (cantons) – Jazira, Kobani and Afrin.

The supreme governing bodies of the autonomous region consist of the Kurdish Supreme Committee and People’s Assembly. These bodies are composed of delegates from the two main political formations, the Democratic Union Party (DUP) and the Kurdish National Council (KNC). As was mentioned above, the DUP is closely connected with the outlawed Turkish Kurdistan Workers’ Party (KWP) and as such comes under attack from the Turkish authorities.

The DUP and the People’s protection units that it formed are striving for domination in Rojava, however other Syrian Kurdish parties united under the aegis of the Kurdish National Council (KNC) managed to achieve proportional representation in newly formed regional public authorities. In fairness it must be mentioned that the process that created a united front of Syrian Kurds, shared protection units and special forces has not been smooth and painless. Rojava is facing growing opposition to DUP’s and its leader Salih Muslim’s attempts to further extend its domination in the region. Many Syrian Kurds dislike the strong influence of the KWP’sextremist wing over the DUP leadership. Moreover, Rojava’s population often disapproves of the actions of the DUP-controlled security organisation Asayish. A considerable number of the Syrian Kurds would prefer to build their autonomy following the example of Iraqi Kurdistan and in close cooperation with the Kurdistan Democratic Party led by Masoud Barzani. The Syrian Kurds appreciate the moral support and the military aid from their Iraqi kinsmen and of Masoud Barzani’s personal mediation efforts in order to unite the Syrian Kurds. Yet, there are still many opponents in Rojava to the further strengthening of ties between Syrian and Iraqi Kurds.

The efforts of external forces to play the Kurdish card in Syria for their own benefit have not ceased either. Turkey, that failed at its attempts to weaken the Kurdish nationalist movement in Syria using military means, has not, however, given up on its belligerent plans against the Kurds. Moving ahead with its military and police actions against its own Kurds, Ankara is supporting a tight blockade of the Syrian Kurdish enclaves from its side; it uses special forces channels and secret agents among radical islamist groups to incite fighting and shelling of Kurdish settlements in the Syrian border areas. Washington trained a few thousand Syrian Peshmerga in the neighbouring Iraq and helped the DUP/ PPU with weapon and ammunition supplies and sent 50 military personnel, ground-based artillery observers, that fine-tune the coordinates for the USA Air Force and the Western Coalition. To prepare a wide-scale offensive ground operation against the Daesh combatants in the direction of Al-Raqqah, the Islamic Caliphate capital, the USA have been building a new alliance under the name of Syrian Democratic Forces. It included Syrian Kurds’, Christian Assyrians’ units and the armed opposition divisions of the Free Syrian Army.

It is not easy to make any predictions today in relation to the future fate of the Syrian Kurds. A lot will hinge on the further development of the situation in Syria. If, by any luck, the ceasefire between the government troops and the Syrian armed opposition forces is achieved and the negotiations between the warring parties on the future of the Syrian state resume, then the Kurds would be likely to join the talks as a third party. It is a fact that at this moment the Syrian Kurds do not promote ideas of separatism and the ultimate disintegration of Syria based on principles of ethnicity and religion. But if the civil war in the country continues and its breakdown into enclaves takes place de facto, then the Kurds will have no other choice but to strengthen their national and state institutions and military formations and to seek foreign allies.
Older Posts Home
Subscribe to: Posts (Atom)