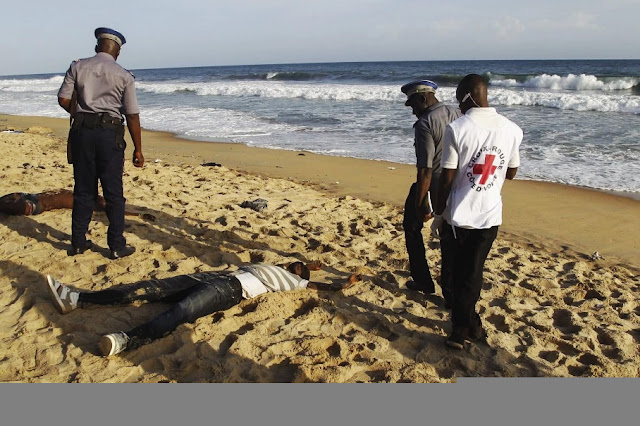 While America and Europe changes their social media profile pictures to show solidarity with victims of one European country, then another, victims of terrorism in non-European and American countries are receiving virtual no attention – let alone sympathy – when they receive even higher death tolls from ISIS.
After the horrific attack on Brussels, it’s worth noting how the major attacks that have recently been carried out by ISIS, or ISIS-sympathizing groups, have been reported in the media – and subsequently how they have been received on social media:
March 22, 2016, Brussels, 34 killed – HEADLINE NEWS
March 20, 2015, Yemen, 137 killed – no headline
April 18, 2015, Afghanistan, 33 killed – no headline
June 26, 2015, Tunisia, 38 killed – no headline
June 29, 2015, Yemen, 35 killed – no headline
October 10, 2015, Ankara, Turkey, 97 killed – no headline
October 31, 2015, Russian plan, 224 killed – HEADLINE NEWS
November 21, 2015, Beirut, 43 killed – no headline
November 13, 2015, Paris, 130 killed – HEADLINE NEWS
December 2, 2015, San Bernardino, 14 killed – HEADLINE NEWS
January 8, 2016 Libya, 50 killed – no headline
March 6, 2016 (only two weeks ago), Baghdad, 47 killed – no headline
March 13, 2016 (last week), Grand-Bassam, 22 killed – no headline
March 15, 2016 (last week), Ankara, Turkey, 35 killed – no headline
ISIS is killing more Muslims and Africans than any other group. Yet for some reason Western media is only highlighting when Europeans and Americans get killed.
This feeds into a “Muslims are against us” mentality, when in fact what we are facing is an imperialist terrorist cult, that targets Muslims more than any other group of people.
Just last week, Grand-Bassam’s beaches were filled people enjoying the Sunday afternoon.
With temperatures on the rise, many across Ivory Coast came to the city’s oceanfront resorts to enjoy the ocean.
For terrorists, this was a perfect opportunity.
Six figures all in black appeared on the beach, wearing balaclavas and carrying guns. Before anyone could process what was going on, the terrorists opened fire.
They had AK-47 Kalashnikov rifles and hand grenades, which they used on anyone within sight.
They marched across the sand, shredding men, women and children – both Ivorians and foreigners alike.
When security forces arrived, the terrorist gunmen killed two of them as well.
“They killed a child, despite him kneeling down and begging,” one witness told the BBC. “They shot a woman in the chest. I swear, I heard them shouting ‘Allahu Akbar.’ They’ve killed innocent people.”
But aside from sources like the BBC and NPR, this story was simply not covered in the mainstream Western media. 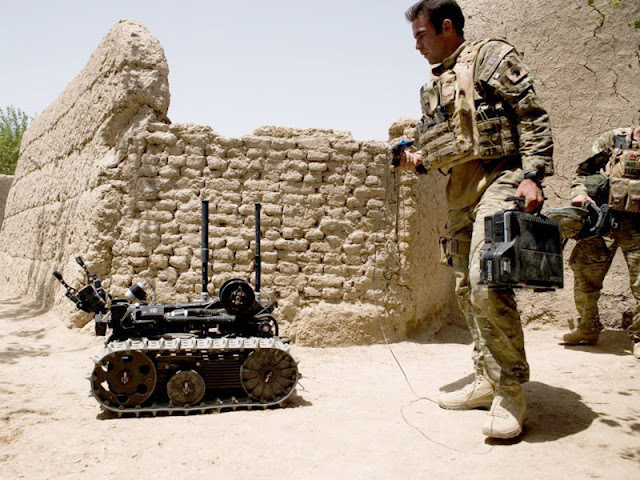 Up to 6,000 troops are being sent to invade and occupy Libya, seizing oilfields allegedly threatened by terrorists NATO armed and put into power in 2011. The London Telegraph, almost as a footnote, reports of a sizable Western military force being sent in on the ground to occupy Libya in an operation it claims is aimed at fighting the so-called “Islamic State” (ISIS). In its article, “Islamic State battles to seize control of key Libyan oil depot,” it reports:

Under the plan, up to 1,000 British troops would form part of a 6,000-strong joint force with Italy – Libya’s former colonial power – in training and advising Libyan forces. British special forces could also be engaged on the front line.

One would suspect a 6,000-strong foreign military force being sent into Libya would be major headline news, with debates raging before the operation even was approved. However, it appears with no debate, no public approval, and little media coverage, US, British, and European troops, including Libya’s former colonial rulers – the Italians – are pushing forward with direct military intervention in Libya, once again.
The Mirror’s “SAS spearhead coalition offensive to halt Islamic State oil snatches in Libya,” claims the West’s 6,000 soldiers face up to 5,000 ISIS terrorists – raising questions about the veracity of both the true intentions of the West’s military intervention and the nature of the enemy they are allegedly intervening to fight.
Military doctrine generally prescribes overwhelming numerical superiority for invading forces versus defenders. For example, during the the 2004 battle for the Iraqi city of Fallujah, the US arrayed over 10,000 troops versus 3,000-4,000 defenders. This means large, sweeping operations to directly confront and destroy ISIS in Libya are not intended, and like Western interventions elsewhere, it is being designed to instead perpetuate the threat of ISIS and therefore, perpetuate Western justification for extraterritorial military intervention in Libya and beyond.
With an initial foothold in Libya intentionally designed to last, it will inevitably be expanded, supporting US AFRICOM operations throughout the rest of North Africa.

The US-British Are “Fighting” the Terrorists They Put in Power 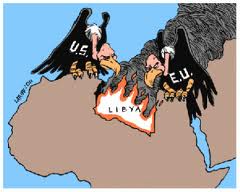 As has been explained by geopolitical analysts since 2011, terrorist organizations like Al Qaeda and their various rebrandings are far from being the West’s true adversaries. Besides being funded, armed, and backed by the West’s closest and oldest Middle Eastern allies – particularly the Saudis and Qataris – these terrorist organizations serve a two-fold purpose. First, they serve as a mercenary army with which the West fights targeted nations by proxy. Second, they serve as a pretext for direct Western military intervention when proxy war fails or is not an option.
This was first illustrated with the very inception of Al Qaeda in the 1980’s where it was used as a proxy force by the US and Saudis to fight the Soviets in Afghanistan. In 2001, the presence of Al Qaeda in Afghanistan was used as a pretext for a US invasion and occupation that endures to this very day.
As of 2011, literally these very same terrorists were organized, armed, funded, and provided with NATO aircover to overthrow the government of Libya. From there, they were rearmed and shipped to NATO-member Turkey where they then invaded northern Syria, and more specifically Idlib and the pivotal city of Aleppo.
The Business Insider would report in its article, “REPORT: The US Is Openly Sending Heavy Weapons From Libya To Syrian Rebels,” that:

The administration has said that the previously hidden CIA operation in Benghazi involved finding, repurchasing and destroying heavy weaponry looted from Libyan government arsenals, but in October we reported evidence indicating that U.S. agents — particularly murdered ambassador Chris Stevens — were at least aware of heavy weapons moving from Libya to jihadist Syrian rebels.
There have been several possible SA-7 spottings in Syria dating as far back as early summer 2012, and there are indications that at least some of Gaddafi’s 20,000 portable heat-seeking missiles were shipped before now.
On Sept. 6 a Libyan ship carrying 400 tons of weapons for Syrian rebels docked in southern Turkey. The ship’s captain was “a Libyan from Benghazi” who worked for the new Libyan government. The man who organized that shipment, Tripoli Military Council head Abdelhakim Belhadj, worked directly with Stevens during the Libyan revolution.

The Business Insider’s mention of Abdelhakim Belhaj working directly with Ambassador Stevens is particularly important. Belhaj was quite literally the leader of US State Department-listed foreign terrorist organization, the Libyan Islamic Fighting Group (LIFG) – Al Qaeda in Libya. Despite his obvious ties to Al Qaeda, he was openly backed by the US during the 2011 Libyan War, and afterward, was posing for pictures with US senators including Arizona senator John McCain in the aftermath of NATO’s regime change operations. LIFG’s leader, Abdelhakim Belhadj, is now reportedly also a senior leader of ISIS in Libya.
Fox News in a March 2015 report titled, “Herridge: ISIS Has Turned Libya Into New Support Base, Safe Haven,” would claim:

Herridge reported that one of the alleged leaders of ISIS in North Africa is Libyan Abdelhakim Belhadj, who was seen by the U.S. as a willing partner in the overthrow of Libyan dictator Muammar Gaddafi in 2011.
“Now, it’s alleged he is firmly aligned with ISIS and supports the training camps in eastern Libya,” Herridge said. 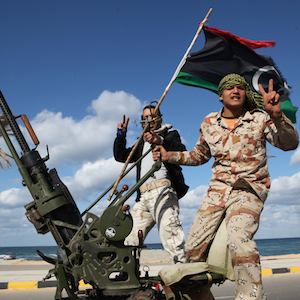 It is clear that the West is not fighting ISIS, but instead, has clearly both created it and is intentionally perpetuating it to help justify its military and geopolitical maneuvering across the Middle East and North Africa (MENA) region, and advance its aspirations toward regional and global political, military, and economic hegemony.
The very same technicals – armed trucks used in combat – bearing the Libyan “rebel” insignia, have literally just been painted over by images of ISIS’ flag, like props on a Hollywood set being used in a bad sequel. With the US-British and European intervention in a destroyed Libya overrun by terrorists – a Libya we were promised by NATO was bringing brought peace, stability, “freedom,” and “democracy” with its 2011 intervention, we see fully the danger of entrusting other nations to a similar fate wrought by Western intervention – most notably Syria.
Older Posts Home
Subscribe to: Posts (Atom)