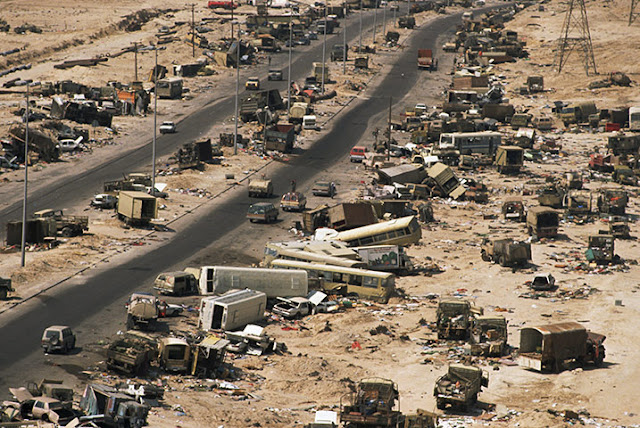 I want to give testimony on what are called the “highways of death.”

These are the two Kuwaiti roadways, littered with remains of 2,000 mangled Iraqi military vehicles, and the charred and dismembered bodies of tens of thousands of Iraqi soldiers, who were withdrawing from Kuwait on February 26th and 27th 1991 in compliance with UN resolutions.

US planes trapped the long convoys by disabling vehicles in the front, and at the rear, and then pounded the resulting traffic jams for hours. “It was like shooting fish in a barrel,” said one US pilot. The horror is still there to see.

On the inland highway to Basra is mile after mile of burned, smashed, shattered vehicles of every description – tanks, armored cars, trucks, autos, fire trucks, according to the March 18, 1991, Time magazine. On the sixty miles of coastal highway, Iraqi military units sit in gruesome repose, scorched skeletons of vehicles and men alike, black and awful under the sun, says the Los Angeles Times of March 11, 1991. While 450 people survived the inland road bombing to surrender, this was not the case with the 60 miles of the coastal road. There for 60 miles every vehicle was strafed or bombed, every windshield is shattered, every tank is burned, every truck is riddled with shell fragments. No survivors are known or likely. The cabs of trucks were bombed so much that they were pushed into the ground, and it’s impossible to see if they contain drivers or not. Windshields were melted away, and huge tanks were reduced to shrapnel.

“Even in Vietnam I didn’t see anything like this. It’s pathetic,” said Major Bob Nugent, an Army intelligence officer. This one-sided carnage, this racist mass murder of Arab people, occurred while White House spokesman Marlin Fitzwater promised that the US and its coalition partners would not attack Iraqi forces leaving Kuwait. This is surely one of the most heinous war crimes in contemporary history. 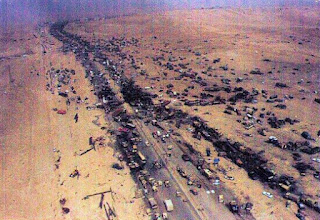 The Iraqi troops were not being driven out of Kuwait by US troops as the Bush administration maintains. They were not retreating in order to regroup and fight again. In fact, they were withdrawing, they were going home, responding to orders issued by Baghdad, announcing that it was complying with Resolution 660 and leaving Kuwait. At 5:35 p.m. (Eastern standard Time) Baghdad radio announced that Iraq’s Foreign Minister had accepted the Soviet cease-fire proposal and had issued the order for all Iraqi troops to withdraw to postions held before August 2, 1990 in compliance with UN Resolution 660. President Bush responded immediately from the White House saying (through spokesman Marlin Fitzwater) that “there was no evidence to suggest the Iraqi army is withdrawing. In fact, Iraqi units are continuing to fight. . . We continue to prosecute the war.” On the next day, February 26, 1991, Saddam Hussein announced on Baghdad radio that Iraqi troops had, indeed, begun to withdraw from Kuwait and that the withdrawal would be complete that day. Again, Bush reacted, calling Hussein’s announcement “an outrage” and “a cruel hoax.”

Eyewitness Kuwaitis attest that the withdrawal began the afternoon of February 26, 1991 and Baghdad radio announced at 2:00 AM (local time) that morning that the government had ordered all troops to withdraw.

The massacre of withdrawing Iraqi soldiers violates the Geneva Conventions of 1949, Common Article III, which outlaws the killing of soldiers who are out of combat. The point of contention involves the Bush administration’s claim that the Iraqi troops were retreating to regroup and fight again. Such a claim is the only way that the massacre which occurred could be considered legal under international law. But in fact the claim is false and obviously so. The troops were withdrawing and removing themselves from combat under direct orders from Baghdad that the war was over and that Iraq had quit and would fully comply with UN resolutions. To attack the soldiers returning home under these circumstances is a war crime.

Iraq accepted UN Resolution 660 and offered to withdraw from Kuwait through Soviet mediation on February 21, 1991. A statement made by George Bush on February 27, 1991, that no quarter would be given to remaining Iraqi soldiers violates even the US Field Manual of 1956. The 1907 Hague Convention governing land warfare also makes it illegal to declare that no quarter will be given to withdrawing soldiers. On February 26,199 I, the following dispatch was filed from the deck of the USS. Ranger, under the byline of Randall Richard of the Providence Journal:

“Air strikes against Iraqi troops retreating from Kuwait were being launched so feverishly from this carrier today that pilots said they took whatever bombs happened to be closest to the flight deck. The crews, working to the strains of the Lone Ranger theme, often passed up the projectile of choice . . . because it took too long to load.”

New York Times reporter Maureen Dowd wrote, “With the Iraqi leader facing military defeat, Mr. Bush decided that he would rather gamble on a violent and potentially unpopular ground war than risk the alternative: an imperfect settlement hammered out by the Soviets and Iraqis that world opinion might accept as tolerable.”

In short, rather than accept the offer of Iraq to surrender and leave the field of battle, Bush and the US military strategists decided simply to kill as many Iraqis as they possibly could while the chance lasted…

Continue this story at ROAR Magazine