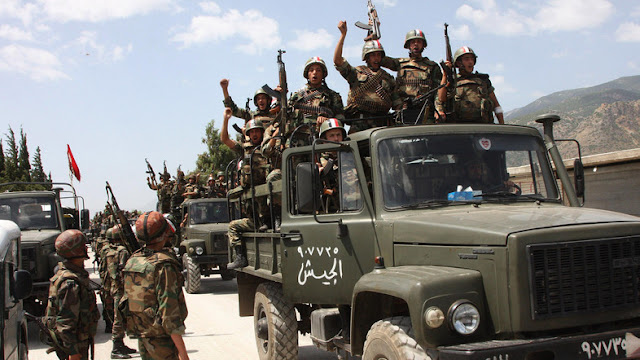 Syria’s foreign minister signaled on Saturday a ceasefire would be difficult or impossible before the borders with Turkey and Jordan were sealed, and before a list of terrorist groups operating in Syria is agreed.

Foreign Minister Walid al-Moualem, speaking in a televised news conference, said he was citing his Russian counterpart Sergei Lavrov, who had said “a ceasefire would not be possible before the borders with Turkey and Jordan are controlled, and before agreement on lists of terrorist organizations, it is difficult to achieve that.”

Rebel groups fighting President Bashar al-Assad have received supplies via both Turkey and Jordan.
Moualem also said any ground incursion without state approval would be considered an act of aggression and aggressors will go home in coffins.

The foreign minister also said that the Syrian government went to talks without preconditions and will not implement any preconditions.

His comments capped a week that saw the collapse of U.N.-led efforts to launch indirect peace talks between the Syrian government and an opposition delegation in Geneva.

The talks broke down in large part because of Syrian government offensives, including on the outskirts of Aleppo, once the country’s largest city. The offensive, aimed at encircling rebel strongholds in Aleppo, was backed by intense Russian airstrikes and sent thousands of area residents fleeing toward a closed Turkish border.

The foreign minister said the government advances signaled that the five-year-old Syria war is nearing its end. “I can say, from the achievements for our armed forces ... that we are now on track to end the conflict,” he said. “Like it or not, our battlefield achievements indicate that we are headed toward the end of the crisis.”

Opposition representatives have said they cannot be expected to negotiate in Geneva at a time when the Syrian government and its allies, including Russia, are escalating attacks on rebel strongholds.